Gramp and I truly treasure ever moment we spend at the school house.  We make new discoveries every time we’re there. Gramp was doing some yard work a few weeks ago and turned up this pretty marble. Spurred on by this find Em and brother Jesse jumped into treasure hunting! A family friend let us borrow a metal detector and hilarity ensued! 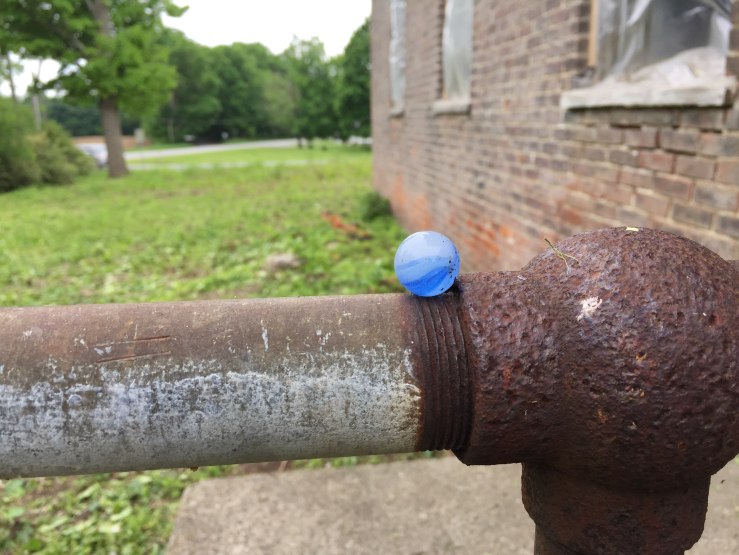 Gramp found a real treasure in the yard!

The Treasure Hunt is On
I’ve never used a metal detector before, and neither has Gramp or Em. It didn’t come with instructions but we figured it out (mostly…I think). At first we didn’t know how sensitive it was or if it even really worked.

Brother Jesse giving it a shot

Em made us hide a dime and then pretend to “find” it for practice. It worked! So the hunt was on! We had some pretty good luck early on and turned up an old hinge. Then we thought we were professionals (we’re not). 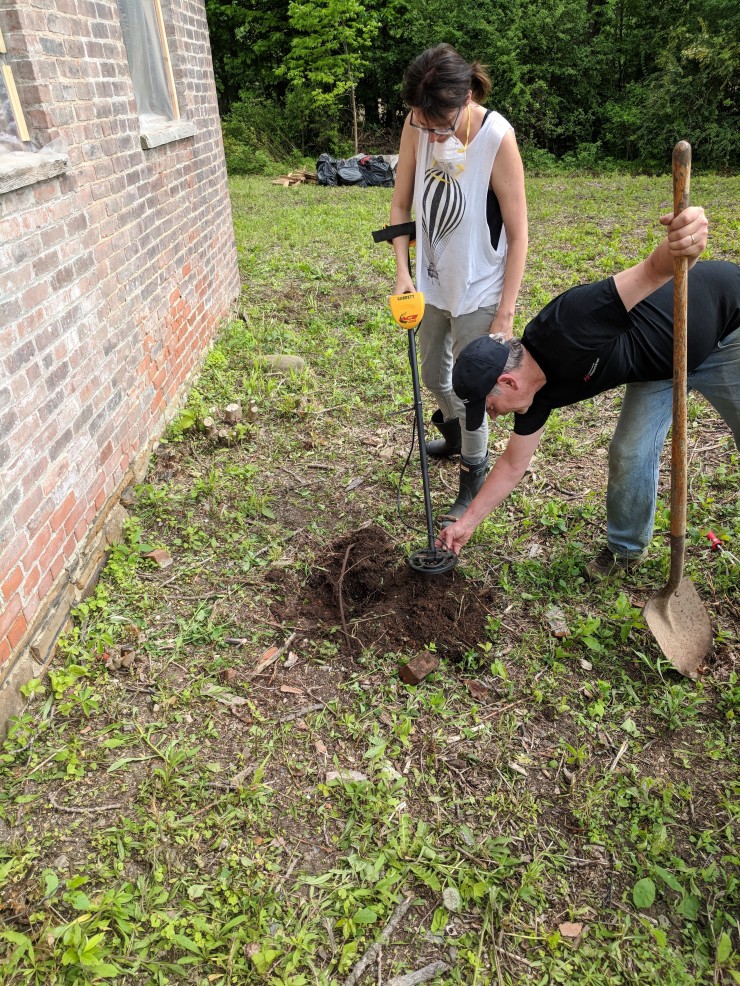 We nominated Gramp to do all the digging

Our first and only success! the rusty hinge!

About an hour went by involving wandering with the metal detector, making Gramp do a bunch of digging, and us insisting “there is something in there!”  “It beeped!” “It beeped again!” Did we find anything else? Nope, just a few nails. Then I insisted it was time to get back to the real work. We’re going to save this hunt for another day!

Little School House Equals Big Trash
When we did the first round of demo last fall we rented a dumpster and filled it with two tons of debris. Once Gramp got going on demoing the historic addition a lot more debris started to pile up. So enter the trash man. Lenny Keys from Salem came and picked up about three truck loads of debris from the addition, which only measures 10′ X 20′ or 200 square feet.

We trashed the place

Where Did It All Come From?
The addition was divided into four different rooms and two hallways so a lot of framing lumber came down. The interior walls were double layers of shiplap. There’s even shiplap on the ceiling! Gramp’s taking his time and saving a much as possible. We’ll reuse it for a feature wall in the bedroom or for the ceiling. Much of it was protected by tar paper and the press board, so it looks brand new. 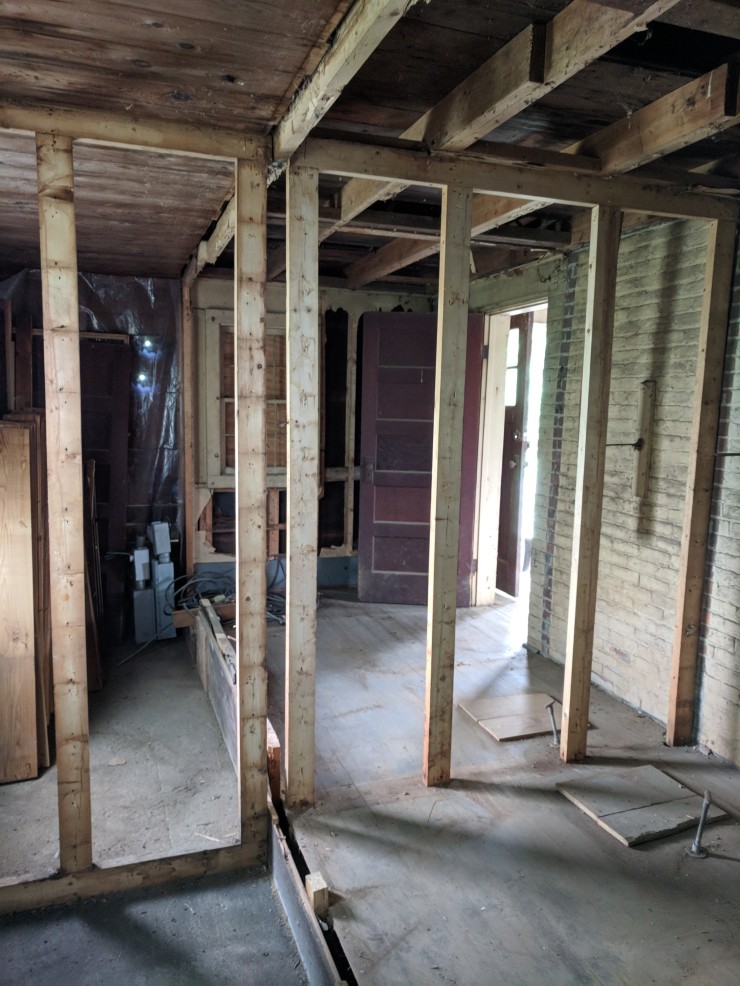 Here’s a before shot, the shiplap was behind the pressboard

shiplap, and this is only one pile

Up Next
The poor awning has seen better days! Gramp’s taking a break from the addition and will start the process of rebuilding the awning this weekend. He’s going to make it as close to the original as possible. We don’t think it’s from 1850, more like from a 1900’s renovation. We’ll keep the knee braces and slate roof, the rest of it is all rotted out so it will be rebuilt. 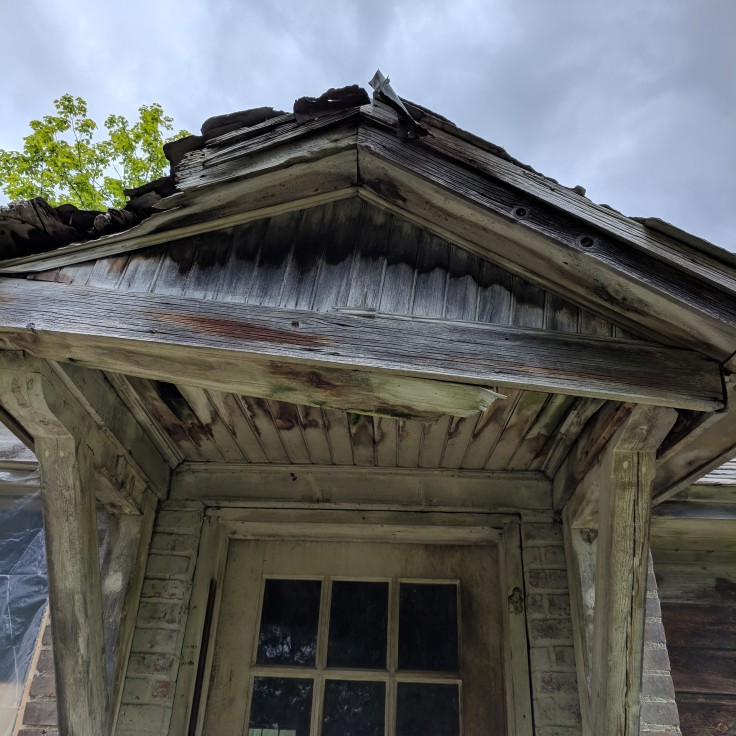 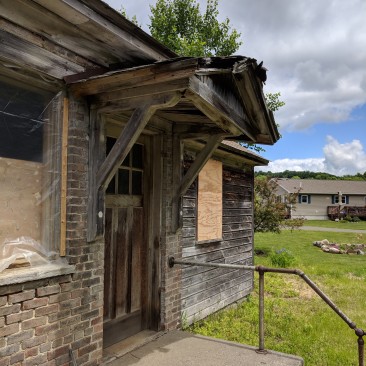 I kind of love how crooked the awning is, but it is literally falling apart, a piece fell on me the other day

Yard Sale or Bust
The yard sale was a lot of work but a lot of fun. We made a little bit of money for the school house and we made a lot of new friends. Some of our extended family who hadn’t been out to see the school house yet stopped by. I kind of forgot to take a lot of photos, but here’s my favorite from the day. 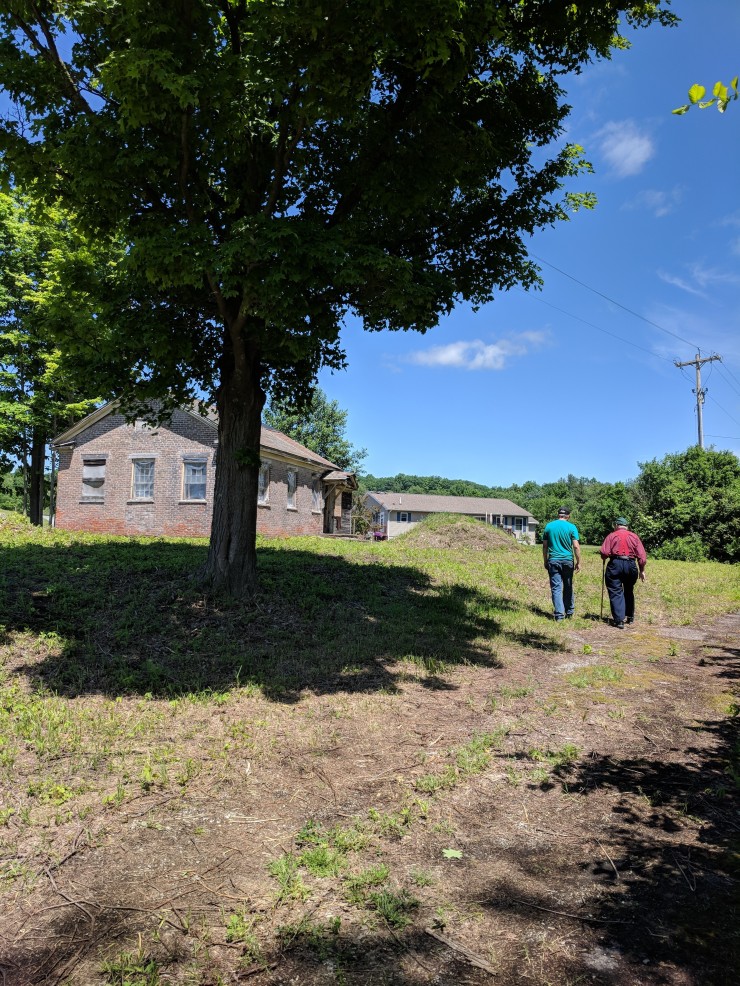 Gramp doing what he does best, talking school house!

Our New Home
We’re settling into village life and love our new old house! I’ll talk more about our adventures in real estate and the long list of DIY projects in this 1910 arts and crafts home in a later blog post. For now we think the toddler really likes it!

Philip is very busy in his new yard

*photo credit for the top photo of the school house with the flowers goes to sister in-law Lori Schultz, thanks for the great pic!

2 thoughts on “From Trash To Treasure; The School House Continues To Surprise Us!”